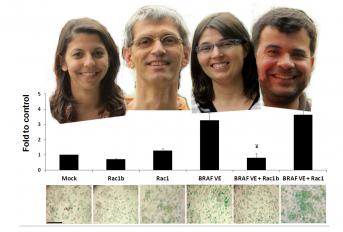 Tumour initiation results from a mutation acquired, for example, in a cell proliferation-regulating oncogene, for example the MAP kinase BRAF in melanoma, thyroid, ovarian and colorectal cancer. As a protective response to this initial proliferative stimulus, tissues induce a growth-arrest program termed oncogene-induced senescence (OIS). It remains largely unknown by which mechanisms the initiated cells eventually escape from the dormant OIS state. We describe evidence that the overexpression of the alternative splicing variant Rac1b is one potential mechanism able to trigger this escape in BRAF-mutant colorectal tumours.

4 Department of Chemistry and Biochemistry, Faculty of Sciences, University of Lisbon, Portugal.


Mutations in the BRAF oncogene have been identified as a tumour-initiating genetic event in mainly melanoma, thyroid and colon cancer, resulting in an initial proliferative stimulus that is followed by a growth arrest period known as oncogene-induced senescence (OIS). It remains unknown what triggers subsequent escape from OIS to allow further tumour progression. A previous analysis revealed that around 80% of colorectal tumours carrying a mutation in BRAF also overexpress splice variant Rac1b. We used normal NCM460 colonocytes as a model to express oncogenic B-Raf-V600E in the presence or absence of co-transfected Rac1b and then analysed the effect on expression of senescence markers. When oncogenic B-Raf-V600E was expressed we observed the induction of the senescence-associated β-galactosidase and of the cell-cycle inhibitors p14, p15 and p21 whereas proliferation marker Ki67 was suppressed. Upon co-expression of splice variant Rac1b, but not of Rac1, the B-Raf-induced senescence phenotype was reverted and expression of the cell-cycle inhibitors downregulated in a reactive oxygen-species dependent manner. We thus provide evidence that co-expression of splice variant Rac1b counteracts B-Raf-induced senescence, indicating the selection for increased Rac1b expression as one potential mechanism by which colorectal tumour cells can escape from B-Raf-induced OIS.