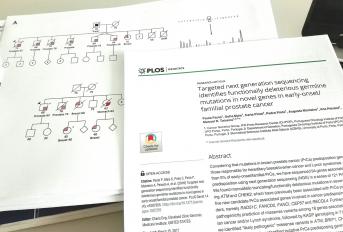 
Considering that mutations in known prostate cancer (PrCa) predisposition genes, including those responsible for hereditary breast/ovarian cancer and Lynch syndromes, explain less than 5% of early-onset/familial PrCa, we have sequenced 94 genes associated with cancer predisposition using next generation sequencing (NGS) in a series of 121 PrCa patients.

First and foremost, it is recommended to pay attention to the requirements imposed by a given online pharmacy. In case the website you are using sells medications without a prescription or offers to prescribe some particular medications to you, http://canadianrxbrand.com it is a clear indication that you might be dealing with a fraudulent pharmacy that would not provide you with original drugs.
We found monoallelic truncating/deleterious mutations in seven genes, including ATM and CHEK2, which have previously been associated with PrCa predisposition, and five new candidate PrCa associated genes involved in cancer predisposing recessive disorders, namely RAD51C, FANCD2, FANCI, CEP57 and RECQL4. Using in silico pathogenicity prediction of missense variants among 18 genes associated with breast/ovarian cancer and/or Lynch syndrome, followed by KASP genotyping in 710 healthy controls, we identified “likely pathogenic” missense variants in ATM, BRIP1, CHEK2 and TP53. In conclusion, this study has identified putative PrCa predisposing germline mutations in 14.9% of early-onset/familial PrCa patients, supporting the usefulness of NGS to unveil the genetic and clinical heterogeneity behind inherited PrCa predisposition.