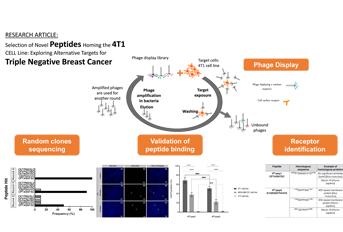 The use of bacteriophages to select novel ligands has been widely explored for cancer therapy.

Their application is most warranted in cancer subtypes lacking knowledge on how to target the cancer cells in question, such as the triple negative breast cancer, eventually leading to the development of alternative nanomedicines for cancer therapeutics. Therefore, the following study aimed to select and characterize novel peptides for a triple negative breast cancer murine mammary carcinoma cell line– 4T1. Using phage display, 7 and 12 amino acid random peptide libraries were screened against the 4T1 cell line. A total of four rounds, plus a counter-selection round using the 3T3 murine fibroblast cell line, was performed.

The enriched selective peptides were characterized and their binding capacity towards 4T1 tissue samples was confirmed by immunofluorescence and flow cytometry analysis. The selected peptides (4T1pep1 –CPTASNTSC and 4T1pep2—EVQSSKFPAHVS) were enriched over few rounds of selection and exhibited specific binding to the 4T1 cell line. Interestingly, affinity to the human MDA-MB-231 cell line was also observed for both peptides, promoting the translational application of these novel ligands between species. Additionally, bioinformatics analysis suggested that both peptides target human Mucin-16. This protein has been implicated in different types of cancer, as it is involved in many important cellular functions. This study strongly supports the need of finding alternative targeting systems for TNBC and the peptides herein selected exhibit promising future application as novel homing peptides for breast cancer therapy.