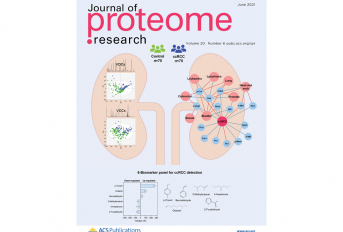 Clear cell renal cell carcinoma (ccCCR) is the most common type (~70%) of renal cancer, having a generally asymptomatic development and risk of systemic progression. Thus, the discovery of more sensitive and specific biomarkers for early detection and more effective treatment becomes urgent. The Research Group of UCIBIO-REQUIMTE - Toxicology Laboratory of the Faculty of Pharmacy of the University of Porto, in collaboration with the Portuguese Institute of Oncology of Porto, has carried out research in the area of ​​metabolomics applied to renal cancer. The most recent work, published this month in the prestigious Journal of Proteome Research, aimed to study the volatile metabolic profile of urine from patients diagnosed with ccRCC (n=75) and control individuals (cancer-free, n=75), to identify a potential panel of biomarkers for early and non-invasive detection of this type of cancer. The results obtained allowed to establish a panel of candidate biomarkers consisting of 6 volatile compounds, which was able to identify the disease with a sensitivity, specificity and accuracy of 83%, 79% and 81%, respectively. Due to the volatile nature of these compounds and the considerable advances in the field of bioelectronic sensors, it is expected that in the near future this type of cancer can be detected in a simple, fast and non-invasive way using an electronic nose sensor.

Clear cell renal cell carcinoma (ccRCC) is the most common type of kidney cancer usually associated with asymptomatic development and risk of systemic progression. Hence, reliable molecular biomarkers of ccRCC are needed to provide early and minimally invasive detection. In this study, urinary volatilome profiling of patients diagnosed with ccRCC (n = 75), and cancer-free controls (n = 75), was performed to investigate the presence of a volatile signature characteristic of ccRCC. Volatile organic compounds (VOCs) in general, and more specifically volatile carbonyl compounds (VCCs), present in urine were extracted by headspace solid-phase microextraction coupled with gas chromatography-mass spectrometry (HS–SPME-GC-MS). Supervised multivariate models showed a good discriminatory power of ccRCC patients from controls in urine. Overall, 22 volatile metabolites were found significantly altered between the two groups, including aldehydes, ketones, aromatic hydrocarbons, and terpenoids. A candidate six-biomarker panel, comprising octanal, 3-methylbutanal, benzaldehyde, 2-furaldehyde, 4-heptanone, and p-cresol, depicted the best performance for ccRCC detection with 83% sensitivity, 79% specificity, and 81% accuracy. Moreover, the ccRCC urinary volatilome signature suggested dysregulation of energy metabolism and overexpression of enzymes associated with carcinogenesis. These findings provide the molecular basis for the fine-tuning of gas-sensing materials for application in the development of a bioelectronic sensor.