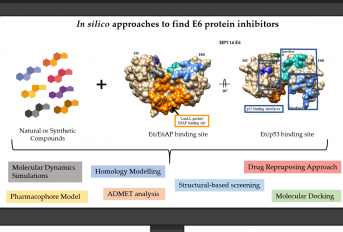 Cervical cancer (CC) is considered the 4th most common cause of death in women worldwide, with over 99% of cases related to human papilloma virus (HPV) infection. According to data from Globocan, in 2020, there were 341 831 deaths, with a higher incidence in developing countries, mainly due to limited financial resources and access to health care. The development of this pathology is related to the expression of the HPV E6 and E7 proteins, since they can interfere with the cellular regulatory mechanisms potentiated by tumor suppressor proteins, such as p53 and pRB proteins. Current treatments as surgery, radiotherapy or chemotherapy affect normal tissues and have several side effects which can cause discomfort and reduce quality of life for patients. Research in CC field is constant and necessary, so additional ways for its detection and treatment are being studied. The relevant role of E6 protein in the development and progression of HPV infection to cervical lesion or even invasive carcinoma has stimulated the interest of scientists to find new anticancer agents. Thus, researchers have combined in silico (computational) methods with in vitro studies to quickly find potential inhibitors/blockers of E6 protein with acceptable characteristics to propose a more specific and less invasive treatment of CC. A collaboration between the research group led by Ângela Sousa (CICS-UBI, Portugal), the group headed by Christianne Soares (UNESP, Brazil) and the group coordinated by Aldo Venuti (IRCCS-IRE, Italy) resulted in this review, where, besides contextualizing the role of HPV in the development of CC and current treatments, addresses several works that apply in silico methods for the discovery of E6 protein inhibitors, as well as, their importance in the development of new drugs.

Cervical cancer (CC) is the fourth most common pathology in women worldwide and presents a high impact in developing countries due to limited financial resources as well as difficulties in monitoring and access to health services. Human papillomavirus (HPV) is the leading cause of CC, and despite the approval of prophylactic vaccines, there is no effective treatment for patients with pre-existing infections or HPV-induced carcinomas. High-risk (HR) HPV E6 and E7 oncoproteins are considered biomarkers in CC progression. Since the E6 structure was resolved, it has been one of the most studied targets to develop novel and specific therapeutics to treat/manage CC. Therefore, several small molecules (plant-derived or synthetic compounds) have been reported as blockers/inhibitors of E6 oncoprotein action, and computational-aided methods have been of high relevance in their discovery and development. In silico approaches have become a powerful tool for reducing the time and cost of the drug development process. Thus, this review will depict small molecules that are already being explored as HR HPV E6 protein blockers and in silico approaches to the design of novel therapeutics for managing CC. Besides, future perspectives in CC therapy will be briefly discussed.