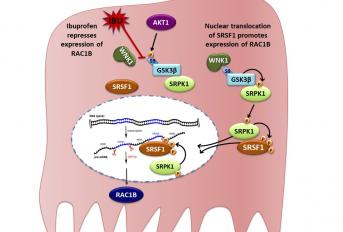 
A major risk factor promoting tumor development is chronic inflammation and the use of nonsteroidal anti-inflammatory drugs (NSAID), including ibuprofen, can decrease the risk of developing various types of cancer, including colorectal cancer (CRC). Although the molecular mechanism behind the antitumor properties of NSAIDs has been largely attributed to inhibition of cyclooxygenases (COXs), several studies have shown that the chemopreventive properties of ibuprofen also involve multiple COX-independent effects. One example is its ability to inhibit the alternative splicing event generating RAC1B, which is overexpressed in a specific subset of BRAF-mutated colorectal tumors and sustains cell survival. Here we describe the mechanism by which ibuprofen prevents RAC1B alternative splicing in a BRAF mutant CRC cell line: it leads to decreased translocation of SRPK1 and SRSF1 to the nucleus and is regulated by a WNK1/GSK3β/SRPK1 protein kinase complex. Surprisingly, we demonstrate that ibuprofen does not inhibit the activity of any of the involved kinases but rather promotes disassembly of this regulatory complex, exposing GSK3β serine 9 to inhibitory phosphorylation, namely by AKT, which results in nuclear exclusion of SRPK1 and SRSF1 hypophosphorylation. The data shed new light on the biochemical mechanisms behind ibuprofen’s action on alternative spliced RAC1B and may support its use in personalized approaches to CRC therapy or chemoprevention regimens.