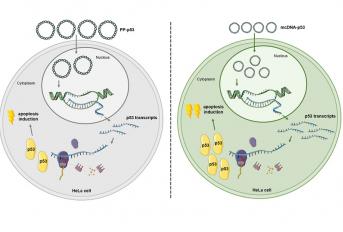 The team led by Ângela Sousa from Health Science Research Centre of the University of Beira Interior (CICS-UBI) has been focused on the development of biotechnological strategies with therapeutic potential for cervical cancer treatment. Cervical cancer is the fourth most diagnosed cancer in women, with an estimated 570 000 new cases and representing 6.6% of all female cancers in 2018 worldwide. The Human Papillomavirus (HPV) is considered the main causative agent for the development and progression of this disease since its E6 oncoprotein targets p53 tumor suppressor protein for degradation. Thus, when p53 activity is compromised, cells lose the ability to control cell growth arrest and cell death, leading to tumor development.

In this research work, parental plasmid (PP) and minicircle DNA (mcDNA) encoding the p53 gene were used in a comparative study, to understand which vector exhibits the most potential features for the suppression of the HPV-18-infected cervical cancer cells. The results revealed that the mcDNA-p53 vector exhibited higher cellular uptake and transfection efficiency, when compared to PP-p53. Regarding the transcription of the therapeutic gene, p53 transcript levels seemed to be higher in cells transfected with the mcDNA-p53 vector. In the context of p53 protein, both western blot analysis and enzyme-linked immunosorbent assay (ELISA) have revealed that p53 expression was significantly higher when mcDNA-p53 vector was used. Concerning cell viability, the mcDNA-p53 vector has demonstrated to be effective in decreasing cancer cell viability and can be considered a safe approach toward non-malignant cells. Furthermore, a proliferation assay was performed, and it was possible to infer that mcDNA-p53 was more efficient in promoting the suppression of cancer cell growth than its PP-p53 precursor form. Considering the importance of also promoting a controlled cancer cell death, the apoptosis induction was investigated, and the results revealed that the mcDNA-p53 vector has a more pronounced effect. Thus, this work demonstrated the greater potential of mcDNA to be used as an innovative biopharmaceutical in gene therapy approaches.

Minicircle DNA (mcDNA) has been suggested as a vanguard technology for gene therapy, consisting of a nonviral DNA vector devoid of prokaryotic sequences. Unlike conventional plasmid DNA (pDNA), this small vector is able to sustain high expression rates throughout time. Thus, this work describes the construction, production, and purification of mcDNA-p53 and its precursor parental plasmid (PP)-p53 for a comparative study of both DNA vectors in the growth suppression of human papillomavirus (HPV)-18-infected cervical cancer cells. First, live cell imaging and fluorescence microscopy studies allowed to understand that mcDNA-p53 vector was able to enter cell nuclei more rapidly than PP-p53 vector, leading to a transfection efficiency of 68% against 34%, respectively. Then, p53 transcripts and protein expression assessment revealed that both vectors were able to induce transcription and the target protein expression. However, the mcDNA-p53 vector performance stood out, by demonstrating higher p53 expression levels (91.65 ± 2.82 U/mL vs. 74.75 ± 4.44 U/mL). After assuring the safety of both vectors by viability studies, such potential was confirmed by proliferation and apoptosis assays. These studies confirmed the mcDNA-p53 vector function toward cell cycle arrest and apoptosis in HPV-18-infected cervical cancer cells. Altogether, these results suggest that the mcDNA vector has a more promising and efficient role as a DNA vector than conventional pDNA, opening new investigation lines for cervical cancer treatment in the future.